Click a letter to view all entries that begin with that letter.

39 entries in the Fire Glossary beginning with "H"

Forcible entry tool with a pointed pick and a wedge at right angles on one end of a shaft and a fork or cat's paw at the opposite end. Used in combination with maul or flat-headed axe for forcing padlocks, doors and windows. Based upon original design by Hugh Halligan of FDNY. Forms the irons" when nested with a flathead axe. Various shaft lengths provide mechanical advantage. Derived from the claw tool (fork and hook).

Chemical gas fire extinguishing or liquid agent for diminishing the combustion reaction rate by acting as a thermal ballast; used mainly in closed computer rooms, aircraft, and other high-value installations where corrosive chemicals or water extinguishers are judged inappropriate. Effective at low concentrations (5%) as compared with CO2 (34%). Being phased out with suitable replacements in most applications, with very restricted exemptions, due to international environmental concerns with this and other CFCs.

A number of individuals that have been organized and trained and are supervised principally for operational assignments on an incident. In the United States, a typical hand crew is 20 in number.

A smaller hose about one inch in diameter used by firefighters to clean apparatus.

A source of danger of personal injury or property damage; fire hazard refers to conditions that may result in fire or explosion, or may increase spread of an accidental fire, or prevent escape from fire. Under worker safety and health regulations, employers have a general duty to provide a workplace free of hazards. See also fire prevention, and HAZMAT.

Hazardous materials, including solids, liquids, or gasses that may cause injury, death, or damage if released or triggered.

Head of a fire

The most rapidly spreading portion of a fire's perimeter, usually to the leeward or up slope.

Fuels of large diameter such as snags, logs, large limb wood, which ignite and are consumed more slowly than flash fuels.

A natural or improved takeoff and landing area intended for temporary or occasional helicopter use, typically in remote areas without other access.

A fire crew trained to use helicopters for initial attack, and to support large fires through bucket drops and the movement of personnel, equipment and supplies.

A tapered thread termination in a firehose coupling for avoiding cross-threading, the location of which is indicated by a notch cut into a single lug on a hose coupling. If the notches are aligned on mating couplings, the Higbee cuts are aligned and the threads will immediately engage when the swivel fitting is turned.

A suppression technique consisting of finely atomized water droplets at several hundred pounds per square inch of pressure. By far, one of the most efficient suppression techniques available. Advantages include a *very* high conversion rate, unmatched atmospheric cooling and control of thermal layers, very little wasted water (and consequent water damage), and the ease of managing a small diameter booster line (defined above) during application. Disadvantages are lack of distance, lack of penetration into various materials, and high risk of burns to the attack crew. HPF is quite popular in Europe, but was discarded in the U.S. due to different building construction and the resulting increase in disadvantages.

A supplemental pump system used to pressurize the water supply, sometimes used during a large fire, or whenever more than one hydrant is being used.

Any building taller than three or four stories, depending upon local usage, requiring firefighters to climb stairs or aerial ladders for access to upper floors.

A shoulder load of hose with a nozzle and other tools necessary to connect the hose to a standpipe.

Hose bundle prepared for carrying to a standpipe in a high-rise building, usually consisting of 50 or more feet of 1 3/4-inch hose and a combination nozzle.

Forged steel hook at end of insulated pole of varying lengths; used for piercing and pulling building materials away from walls and ceilings. Similar to nautical gaff hook. Short hook with a pointed tip is a pike pole; longer hook on a San Francisco hook; two offset hooks on either side of tip is a universal hook; long p-shaped hook is a Boston rake for pulling plaster and lath; short hook with claw on opposite side of tip is either a gypsum hook or the narrower ceiling hook; pike pole with a short handle is a somewhat useless closet hook.

Flexible conduit for moving liquids under pressure; made of various materials including cotton, rubber or plastic (such as PVC); construction may be braided, woven, wrapped or extruded, often in layers (liner and jacket); hose construction and size differs according to its intended use (e.g., hard suction, attack, forestry, booster); typically stocked in standard lengths and coupled together with standardized fittings. See hose coupling.

Part of fire engine (or hose wagon) where hose is stored for transport and easy access; stocked in layers or rows for quick selection of the desired length, diameter and type of hose; may include hoses pre-connected" to pump outlets on the engine.

Mechanical ramps permitting vehicle tires to roll over top of hose without pinching or damaging the hose. Sudden hose-pinch can cause dangerous backpressures in a running hose and at the pump and release of the pinch can cause a staggering surge at the nozzle end.

Rigid interlocking end-pieces on fire hose; used for connecting hose to hydrants or fire engine pumps and other hose appliances (nozzles, wyes, manifolds, strainers, etc); standardized sizes and threads or other (non-threaded) pressure-sustaining interlocks (e.g., Storz" or other "quarter-turn" connectors); lugs cams or pins are used to tighten and loosen couplings by hand or with a hose wrench.

Rigid frame with rollers designed to fit over windowsill or roof parapet to prevent chafing as hose is pulled across it. Can also refer to a machine designed for rolling hoses in preparation for storage.

Structure for hoisting hoses to permit them to drain and dry.

A handcart, vehicle, or trailer adapted for storing and hauling hose and related equipment; used by industrial fire brigades with large buildings, or where supplemental hoses are needed beyond that normally carried on a fire engine; also used for taking attack hose into a high-rise and for returning dirty, wet hose to the station instead of loading the hose bed with it. Vehicular hose wagon may carry 1,000 to 3,000 feet of hose. May also include small booster pump.

Tool for holding hose couplings against opposite turning forces (tighten/loosen); may be one of several designs for different shapes of cleats or lugs on couplings (round, flat, recessed, etc), and also of different sizes according to the couplings being handled, and come in various combinations to minimize the number of different tools necessary on the fire ground. Also known as a Spanner wrench".

A particularly active part of a fire.

39 entries in the Fire Glossary beginning with "H" 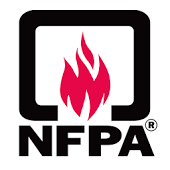 Copyright © 2006-2021. YourFirstDue Inc. All Rights Reserved. Designated trademarks and brands are the property of their respective owners. Content on this web site is supplied by Ripley Fire - Rescue - Ripley, WV. YourFirstDue Inc. cannot be held responsible or liable for any content, text, pictures, or any other media found on this web site. Maintained by the members and staff of Ripley Fire - Rescue - Ripley, WV.
Management Login
Powered by